James Richard Johnson was the seventh of the 13 children that William Jonathan Johnson & Eliza Harris Tompson had. He was born on 10 Dec 1849 at Pitt St Sydney. He married Frances M Crossing on 27 Mar 1883 in St John’s, Mudgee, NSW. Frances, known as Fanny, was born in 1860, one of 12 children of Richard Crossing & Frances Maria Griffith.

There is no much information on James in old newspapers. It appears the couple lived in Ashfield in Sydney. The Sands Directory of 1887 has him in Queen St, and from 1907 at 26 Victoria St. The Sydney Morning Herald on Sat 24 Mar 1906 carried a report of the wedding of Clara Crossing in Summer Hill, a nearby suburb, and the reception was at their home Tugalara. The 1913 electoral roll has Fannie, Florence, Frances Beatrice and James Richard Johnson all living at 26 Victoria St. Florence was described as a sowing mistress, James a bank clerk and Fannie and Frances Beatrice domestic duties.

01. Beatrice Frances Johnson was known as Bee, though in the electoral rolls she is listed as Frances Beatrice. She married Andrew Arthur Buckley in Ashfield in 1915 (record 5290). Andrew’s parents were Edward Buckley & Margaret Helena Nash. Andrew was a farmer and grazier at Goonoo Goonoo Road near Tamworth NSW. He features in two or three court cases reported in newspapers involving theft and wilful killing of his sheep carried out by a farm labourer (eg The Tamworth Daily Observer on Thu 02 Feb 1911). He died on 14 May 1954 in Wamberal, aged 80, which makes his age 41 at his marriage in 1915. The Gosford Times and Wyong District Advocate carried notice of probate on Fri 25 Jun 1954:

In the Will of ANDREW ARTHUR BUCKLEY late of Gosford but formerly of Tamworth in the State of New South Wales, Retired Farmer and Grazier deceased. Application will be made after fourteen days from the publication hereof that Probate of the last Will and Testament dated the Twelfth day of October, one thousand nine hundred and forty-eight may be granted to FRANCES BEATRICE BUCKLEY the Executrix named in the said Will limited until she shall die with leave reserved to Andrew Adrian Buckley the other Executor named there in to then come in and prove the said Will and all notices may be served on the under mentioned address…

It appears the couple moved to Queensland as their three children were born in Bundaberg.

James must have become unwell and taken the family back to Sydney because he died in Ashfield, NSW, the year after Eileen’s birth.

From birth records and electoral rolls we see the family move around NSW on a number of occasions. Their first child was born in Camden, some others were born in the Wellington-Mudgee district, and others in the Parramatta district. From 1930 to 1934 we have the family living at The Bangalow, 74 Old Prospect Rd, Wentworthville, NSW; Cyril was described as a motor driver. During 1935 and 1936 they lived at Pontibakh, Attunga, (20km north-west of Tamworth, NSW); Cyril then was a dairyman. In 1943 and 1949 they show up as farmers at Clover Hills, Pappinbarra (about 25km north-west of Wauchope, NSW). The first 7 of their children also show up as farmers in these two rolls at this address. Their children were:

04. Clive Leicester Johnson enlisted on 15 Jan 1915 at Liverpool NSW and served with the 1st Australian Light Horse in Egypt during WWI.His service record can be read online here. There is an entry for Clive Leicester Johnson on page 286 of the book Canterbury Boys (including the photo above). From the 1st Australian Light Horse he transferred into the 2nd Squadron Australian Flying Corps. He had been educated at Fort St in Leichhardt, and his was service listed Egypt, Lemnos and France. He was wounded whilst on a bombing raid on 12 Dec 1917, invalided to a casualty clearing station in Albert, and to No 2 Stationary Hospital. He returned to Australia on 09 Aug 1918.

In the 1913 electoral rolls Clive lived with his parents at Ingalara, Victoria St Ashfield; he was described as a clerk.

In the 1930 to 1963 electoral rolls Clive and Vera lived at Samarai, 41 Olphert Rd Vaucluse; he was then a bank officer.

01. Margaret Leicester Johnson enlisted during WWII at Paddington (service Number – NFX202014). No other information is known of her at this stage.

03. Robert Leicester Johnson became an accountant and married Heather Agnes Edwards (1929 – 24 Nov 1978 in Frenchs Forest) in Condoblin in 1953. They lived at 22 Gulliver Rd, Dee Why, between 1954 and 1977. There were two other males living at that address in 1977: Ian Leicester Johnson and Robert Bruce Leicester Johnson, both students. 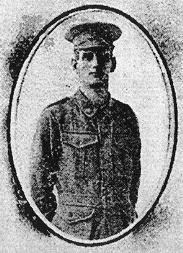 05. Kenneth Leicester Johnson was educated at Stanmore Public School. The family by then were at Ingalara, Weedon Rd, Artarmon. He enlisted as a trooper on 04 Dec 1915, number 2199 in the 7th Light Horse. He embarked on 11 Mar 1916 for Egypt. He returned to Australia on 28 Jun 1919. His service record can be read online here.

The electoral rolls between 1930 and 1936 have Kenneth working as a grazier at West Lynne, Terry Hie Hie (about 50km south east of Moree in NSW). His mother Fanny and sister Muriel also lived on this property. The 1958 and 1963 rolls have Kenneth and his sister Muriel farming at Yanggara, Yandina (8km north of Nambour) QLD. There are records in 1913 of a Kenneth Leicester Johnson as a dairyman in Queensland, though we can’t be certain that this is the same person.

The image of Kenneth is taken on page 287 of the book Canterbury Boys.

We do not think that Kenneth ever married.

The 1930 electoral roll has Kenneth working as a cable operator, living at 65 Kareela Rd, Neutral Bay along with Frances Mary Duff Johnson. Between 1933 and 1935 they lived at 88 Cremorne Rd, Neutral Bay. In 1936 the couple moved to Darwin; their address is shown as “B. A. T.” which is presumably the British Australian Telegraph Office (Darwin was where the submarine cable to Java connected Australia to the rest of the world). In the 1940s they moved to 46 Royalist Rd, Neutral Bay, and number 31 in the 1950s. By 1963 Eric had retired to 8 Hilltop Rd, Wamberal.

Mrs. ERIC JOHNSON, of Darwin, formerly of Sydney, is pictured with her two small sons. Michael (right) and Jamie. They are visiting Mrs. Johnson’s two sisters, the Misses Nell and Muriel Brody, of Cremorne, and recently returned from three weeks spent in Barraba as the guests of Mrs, Johnson’s mother-in-law, Mrs. J. Johnson, of “Woorarra.” They will leave for Darwin on March 7.

The flying doctor of Northern Territory (Dr. C. C. Fenton) and Mr. Eric Johnson, of Darwin, who were injured when Dr. Fenton’s Gipsy Moth ‘plane crashed shortly after taking off from Darwin aerodrome late yesterday, were reported to be in an improved condition in Darwin Hospital to-day.

Both are suffering from severe shock and it will be two or three days before they are allowed out of hospital. Dr. Fenton also suffered a badly broken nose, while Mr. Johnson received severe cuts and abrasions.

“Mrs. Johnson”, wife of Mr. Eric Johnson, who saw the crash, said that the occupants’ escape from death was nothing short of a miracle.

There was a report in the Barrier Miner on Fri 13 Nov 1936 in which Dr Fenton stated that this was his third plane he had crashed, and that it was uninsured:

… but the tragedy of the accident was that he was not in a financial position to buy a new ‘plane or to repair or rebuild the remains of “my two earlier ‘planes.”

“Until I obtain another ‘plane,” he added, “I am afraid flying doctoring is finished. The last machine was not insured, and I will have to bear the entire loss myself. I have crashed three ‘planes now, while in the course of my duties. The first occurred at Victoria River Downs more than two years ago; the second happened at Katherine 12 months later. I was searching for an injured miner near the Eureka mine, and after two forced landings the under-carriage dropped off the machine. I paid £600 for this last machine, and spent £200 on an overhaul early this year.”

Eric was described in another report as a “supervisor of the Eastern Extension Cable Company”. It was his first time in an aeroplane (the Barrier Miner, Wed 11 Nov 1936)!